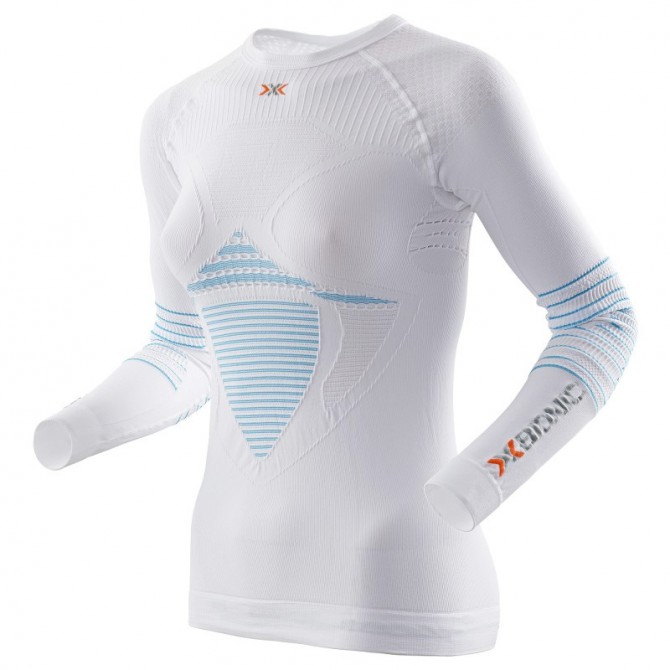 It is not currently available

Underwear shirt X-Bionic Energizer MK2 Woman to reduce sweat, don't prevent it: more horsepower, larger capacity, better chassis. In the end, of course, it's all about higher speeds and better safety. That's exactly the philosophy of X-BIONIC®. Superior products, like the BIONIC Energizer™, aren't just replaced, rather they are constantly improved. Our Swiss textile engineers needed months and months in the research laboratory together with our performance athletes. They focused mostly on the athlete, not on the product. How can we better support athletes in their endeavours? In the end, you could hardly recognize the BIONIC Energizer™ anymore: a much larger 3D-BionicSphere® System, newly defined ventilation chambers, better joint protection.
AirComplex-Zone - increased insulation to 72 cm²: at the solar plexus, directly under the 12th thoracic vertebra, important nerve fibres come together and receive signals that influence one's entire well-being. The Bionic Energizer™ MK2 protects this sensitive area with special channels. Warm air enclosed there optimally insulates in the cold. The system's structure processes excess sweat from physical activity and provides a nice, cool feeling all over.
3D Bionic Sphere® System - 50% larger evaporative surface: with the increase in size and anatomical fit, the 3D Bionic Sphere® System works even more effectively. In the same period of time as before, it can process more sweat, and it can store 8cm³ more air for insulation during recovery phases.
Air-Conditioning Channel®: is a ventilation system of channels that flow around the body, continuously carrying away moisture and warmth. It allows air to flow to body regions not normally accessible by fresh air circulation.
SweatTraps®: trap perspiration before you start to feel it. Sweat is wicked away so it can evaporate using heat dynamics. A film of perspiration - too thin to be noticeable - is left behind to cool the skin.
ExpansionRibs™: the knitted fabric folds apart based on the accordion principle, insuring that cold doesn't cool down the elbows. Even when sharply bent, the insulating effect is maintained through warm air stored in the interior. The flexibility of the ExpansionRibs™ and the elasticity of the yarn allow a frictionless freedom of movement.
SweatTraps® - 40 cm² surface area for sweat transport: since a lot of sweat is produced in the chest area, SweatTraps® are placed strategically all around the 3D-BionicSphere® System in order to speed the transport of moisture.
SweatTraps® on the back: to make sure you don't waste one single drop of valuable sweat, the closely aligned rows of SweatTraps® now form the bottom of the 3D-BionicSphere® System on the back.
Air Guides® 1 mm strong - improved air circulation: the Air-Conditioning Channel® is enveloped by the Air Guides® so that it can also function effectively under a second layer. The speed of evaporation is increased by multiples.
3D-BionicSphere® System on the back: guarantees effective ventilation so moisture is quickly wicked and transported away. No sweat means insulating air pockets in the wavelike structure protect against cold.
ShoulderPads™: every single honeycomb chamber of the newly developed ShoulderPads™ construction stores warm air for insulation. Simultaneously, they insulate the shoulder joint without limiting its range of motion.

10 Other products in the same category: